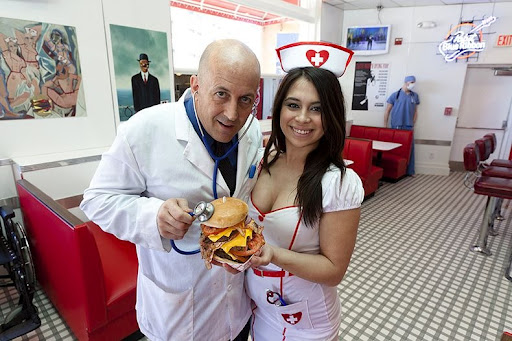 I’m actually kind of fond of the Heart Attack Grill, because unlike virtually every other restaurant around, at least they’re up front about the risks of regularly visiting. Yet I’m guessing the calories in their flatliner fries and their triple bypass burger aren’t any higher than those found in their Five Guys’ or Carl’s Jr.’s counterparts, and that the Heart Attack Grill’s Coca-Cola’s pretty much the same as everyone else’s as well.  And yes, as ABC’s shoot from the hip Dr. Richard Besser (I’m a big fan BTW) pointed out to me yesterday, they do have an 8,000 or so calorie burger, but yet so do so many other restaurants with shock value, get-your-picture-on-the-wall-if-you-can-eat it meals.

The problem isn’t inherent to the Heart Attack Grill.  It’s also not the other umpteen-gazillion restaurants out there.  The problem is how normalized the practice of eating out has become.  What was once a rare family or personal indulgence is now a regular occurrence, with more than 50% of our food dollars being spent on foods we buy outside of the home, and lord knows what percentage of the remainder being spent on reheating boxes, stirring packages together and ultimately just pretending to actually cook.

As part of our intake questionnaire in my weight management practice we ask how many prepared meals a person purchases on a weekly basis.  While I haven’t crunched the numbers, I’d be surprised if the average were lower than 5.
I guess what I’m getting it is that all the Heart Attack Grill is doing is meeting a demand, and that it’s the demand that’s broken, not the suppliers.

What I want to know is what has happened to society to lead to that increase in demand?  Why don’t we value home cooked meals any more?  Why do we as a society utilize restaurants like our parents utilized grocery stores?
While it’s impossible to finger point at specific answers to those questions up above, that doesn’t mean we can’t do something about them.  In fact I’d argue that there’s no shortage of things we can do, just that there seems to be little, if any, political or personal will to do them.  Environmental problems require environmental changes. We need to change what we consider to be “normal” such that meals out again become rare treats, and that sitting around family dinner tables again becomes the norm.

So how do we do that?

Some off the top thoughts – re-prioritizing after-school activities to include at least one family shared cooked meal, turning off our electronic smart phone tethers when we leave the office, actually scheduling cooking and shopping times into our agendas, bringing home economics back to our schools, running public health campaigns vilifying purchased meals as a whole (and/or promoting actual cooking), changing crop subsidies such that places like the Grill can’t serve ridiculously cheap calories, changing zoning laws to curtail the practice of fast food setting up within walking distances of schools, eliminating school and public institution based no-name fast food, instead of cities giving out free trees giving out free seeds and compost for backyard vegetable gardens, tax subsidies on fresh fruits and vegetables…….

That the Heart Attack Grill (and other restaurants) exist isn’t the problem, it’s the demand for their products and services that we need to change.

Yoni Freedhoff, MD, is the founder and Medical Director of the Bariatric Medical Institute , dedicated to the (nonsurgical) treatment of overweight and obesity since 2004, and his personal website, Weighty Matters, is ranked among the world’s top health blogs.  You can also follow Dr. Freedhoff on Twitter and Facebook.