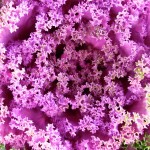 With the current interest in healthy eating, kale is enjoying increased popularity. It originated in the eastern Mediterranean but is consumed in many countries. It is low in calories and virtually fat free, a good source of calcium and an excellent source of vitamins A and C. Also present in smaller amounts are vitamin E and the minerals iron, zinc, magnesium and folate as well as important dietary fibre. Kale is also rich in phytochemicals that are thought to have disease-fighting properties.

Kale is a non-heading form of the cabbage family, easily identified by its frilly leaves, arranged in a loose bouquet formation. The plant comes in many varieties and colors. The most common variety is deep green in color, but others are yellow-green, red or purple. . The colored varieties or “flowering” kale – sometimes called salad savoy – are most often grown for ornamental purposes. They are edible but have a stronger flavor than regular kale.

Keep kale chilled. If left in a warm environment it will wilt and become bitter. Look for a fresh green color – leaves should not be yellowed, browned or wilted. Choose smaller bunches as they will be tenderer and have a milder flavor than bunches with larger, coarser leaves.

The longer you store kale, the stronger its flavor becomes, with its mild, cabbage like flavour becoming more piquant and bitter. Use within a day or two of purchase, or picking, to ensure peak freshness. Wrap unwashed kale in damp paper towels, put in a plastic bag and store in the vegetable crisper.

To prepare kale, start by thoroughly washing in ample amounts of cool water. Remove any grit and sand clinging to leaves and stems. Trim off any roots and then separate the leaves. Swish them around in a sink or basin full of cool water. Do not soak. Remove leaves, making sure that the sand and grit is left behind. Repeat process if necessary.

The key to good kale is cooking it as quickly as possible. In soups and other brothy dishes however, it may need a little longer to allow the flavor to mellow. It may also be necessary to blanch or pre-cook the kale to soften it.

Blanching
Drop prepared kale into a large pot of boiling water. Cook just until wilted, for 5-15 minutes, depending on how tender or coarse the kale is. Drain thoroughly and cool before squeezing out any excess moisture. The cooling process can be hastened by running cold water over the blanched kale.

Braising
Braising is a great way to give kale a richer flavour.

Sautéing
Kale can be sautéed after blanching or without blanching. If it is blanched first, all it takes is a little oil, 2-3 tablespoons (30 – 45 mL) for a large bunch and quick heating in a large saucepan. For smaller amounts, cut back on the oil accordingly. Experiment to find out what works best in your kitchen.

If you’d rather sauté without added fat, broth substitutes nicely. In a non-stick saucepan, put enough chicken or vegetable stock to generously cover the bottom. For extra seasoning, add finely chopped garlic, onions, leeks or shallots. Bring to a boil and toss in prepared kale. Lower temperature to medium-high and simmer until kale is limp and wilted but not mushy, for 3 to 15 minutes. You may need to add more stock to the pan as it evaporates.

Steaming
Tender young kale can be steamed using only the water left on the leaves after washing. Toss into a non-stick saucepan, cover and cook over medium heat until wilted. More mature kale can be steamed whole or coarsely chopped. Cover and cook until wilted in a non-stick saucepan with 1/2 inch (1.2 cm) of water in the bottom. Shake the pan occasionally to ensure even cooking. Time required will vary from 2 to 15 minutes. Kale can also be steamed using a vegetable steamer over boiling water.

Microwaving
With results similar to blanching, microwaving kale is quick and easy. Place washed and prepared kale in a microwaveable dish, cover loosely and cook on high until wilted. Do not dry the kale before placing in the microwave. The water left on the leaves will help them cook.

Easy Ways to Use Kale

Substitute kale for spinach in any of your favorite recipes but remember it will have to be cooked a little longer to obtain the same soft texture.

Sausage with Kale and Potatoes

A single pot is all you’ll need to cook up this sturdy, down-to-earth stew.

Add onion, garlic and potatoes to pot. Cook and stir gently until onion is transparent. Stir in kale; cover and cook about 2 minutes. Return sausage to pot. Stir in broth, vinegar, salt and pepper. Bring to boil; reduce heat. Cover and simmer gently 1 hour, stirring in tomatoes during last 30 minutes.