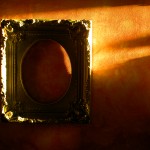 People have a tendency to hang pictures too high on the wall. They should be hung at eye level, which will vary, depending on whether people in the room usually sit or stand and how old they are.

Here are a few other pointers:

The safest procedure in deciding where to hang a picture is to cut a piece of paper the size and shape of the picture. Tape this lightly to the wall in a test position and study the results. Move the paper around until you are sure of the best placement.

Work toward variety in hanging pictures by placing one big picture on one wall, a grouping of two or three on another and possibly a large grouping of quite a few smaller ones on still another. A single picture hanging by itself is often quite effective. However, a room in which all pictures are hung singly can look a bit boring.

When grouping pictures, harmonize the grouping by keeping them within an imaginary rectangular or square. The spacing between frames is important. Too little space detracts from each picture; too much space loses the cohesion of the grouping. No more than three inches (7.5 cm) between pictures is suggested.

A common denominator or something the same in the grouping will give unity. It could be the same medium such as all photographs, prints or watercolours; the same frames or matting; or the same subject such as all landscapes, people or animals. However, be careful not to have so much unity that the grouping becomes uninteresting.

Other things to consider when hanging pictures include:

Getting pictures to be “just right” takes time but if done well, your pictures will show off themselves and the room!