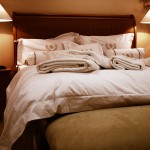 Winters in Canada are long and cold. Nothing is as comforting as snuggling up in bed under a cozy, warm duvet for a good night’s rest.

The word “duvet” comes from the Norse word “dunn”, meaning “down”. The French adopted the word which eventually evolved into “duvet”, referring to a down-filled quilt. Unlike a comforter, a duvet is meant to be used with a cover.

Natural down and feather fillings – Traditionally, duvets were filled with down, the soft inner plumage of waterfowl such as ducks and geese. The light, fluffy filaments in down provide loft which traps the air to provide warmth and springs back into shape if compressed. Down is more expensive than feather fillings, with goose down being the softest and most costly. Natural down and feather fillings are more comfortable in all seasons than synthetics because of their wicking capabilities (ability to let moisture escape). Natural fibres are also very light and thus very comfortable to sleep under. Combination down and feather duvets are also available, as well as hypoallergenic down duvets which have been thoroughly processed to minimize allergic reactions.

Wool fillings – As a duvet filling, wool is making a comeback. It provides high insulation while also wicking moisture away from the body for comfort. Duvets made of wool are comparable in cost to down.

Ticking is the outer shell of the duvet. The thread count (number of threads per square inch) of the ticking is important, particularly for down/feather fillings so that the filling does not escape. A higher thread count in duvet ticking means that the weave is tighter and therefore more durable over time. A thread count of 200 or greater is recommended. Most duvet tickings are 100% cotton which offer superior breathability. Cotton-polyester is also a popular choice and provides breathability and easy-care.

The Tog is the warmth rating of a duvet. A Tog of 3.0 is suitable for summer use and for hot sleepers, whereas a Tog of 10.0 or more is generally best for winter temperatures. Warmth should not be confused with weight – a lightweight down duvet has excellent insulating qualities.

Duvets are available in twin, double (full), queen and king sizes. If you prefer not to use a bed skirt, you may wish to purchase a duvet size larger than your bed size.

With proper care, a duvet will last a long time. Always follow the cleaning instructions on the label. Duvets made of natural fillings must be drycleaned. Most synthetic duvets are washable. Washable duvets should be washed in a large capacity washer, dried with tennis balls to fluff them up or air dried. To keep down/feathers evenly dispersed to ensure there are no cold spots, down/feather duvets should be plumped up by shaking regularly.

In order to protect your duvet from dirt and body oils, the duvet should be protected with a duvet cover. The use of a duvet cover will also mean that your duvet will need cleaning less frequently.

A good duvet is an investment. Be sure to do what you can to extend the life of your duvet – and stay warm!