Skip to content
Home » The Latest on Making Flavoured Oils 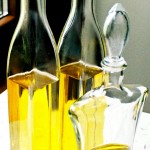 Few foods can boast having the intensity of taste found in a flavoured oil. Just a few drops of a specialty oil can complement a wide variety of foods and enhance their nutritional value by replacing such traditional, highly-saturated toppings as butter, cheese or other rich sauces.

By combining the light texture and bland taste of canola oil with a potpourri of ingredients, it is easy to brighten up a vinaigrette . . . to intensify the flavour of grilled vegetables or meats . . . or to grace the nutritional value of steamed vegetables.

Flavoured oils are made by steeping foods such as herbs, chile peppers, citrus rind or even nuts in canola oil. The safest and easiest way to transfer the flavour from such foods is to heat the canola oil with the flavouring ingredients, at a low oven temperature, for a specified time. This allows the water in the food to evaporate, and the flavour of the food to be infused with the oil.

Be wary of instructions for making flavoured oils which suggest using fresh produce, and where the oil is not heated. If the water is not driven out of the flavouring food, there is a risk of a botulism toxin developing in the oil. This toxin, produced by a bacteria called Clostridium botulinum, is able to grow in oil when a fresh food is present to provide moisture. Heating the oil and its flavouring foods, removes this moisture, and the opportunity for the toxin to grow. The best container to use in making flavoured oils, is a 2 cup (500 mL) glass measuring cup. The handle is convenient to removing the cup from the oven, and the spout allows for easy pouring.

Should you not have a 2 cup (500 mL) measure, use an empty 28 oz (796 mL) tin can – the size commonly used for canned tomatoes. Wash and dry the can, removing the label and the lid. Use the clean tin to hold the canola oil and the flavouring foods.

It is possible to make two or more different flavoured oils at the same time, using a container for each flavour combination. Two containers can be heated at the same time in the oven, but it is important not to use more than 1 cup (250 mL) of oil per container nor to use a different container from that called for in the method. Once heated to the correct temperature, the oil should be cooled, then refrigerated at all times and used within one month.

After heating, the finished oil should be clear and the vegetables well browned. A cloudy appearance after the oil is strained, or a separate layer at the bottom of the bottle indicates that moisture is still present in the oil. If this should occur, the oil should be heated until it becomes clear, or refrigerated and used within one week.

Amount of Ingredients Needed to Make Up 1 Unit

Serve in a small bowl with a sprinkling of chopped fresh basil and small pieces of crusty French bread for dipping.

A great oil to brush on pizza shells before adding the toppings.

Use in a vinaigrette or brush on chicken as it grills.

Use this nut-flavoured oil in a simple vinaigrette and sprinkle the nuts over the salad.

Follow procedure for making flavoured oils and heat oil as directed above for 1 hour 40 minutes. Nuts may be left in the oil to use in garnishing a salad.

A great oil to add heat to pizza or Italian flatbread appetizers.

Remove stems from peppers, cut in half and remove seeds. Follow procedure for making flavoured oils and heat oil as directed above for 2 hours.

Team this oil with a mild vinegar such as rice or white wine to let the flavours shine through.

Follow procedure for making flavoured oils and heat oil as directed above for 2 hours.

In a large pot of boiling water, cook pasta until tender but firm, 3 to 4 minutes. Microwave vegetables until tender crisp or add vegetables to the pasta during the last 2 minutes of cooking. Drain pasta and vegetables and return to cooking pot.

In a bowl or plastic bag, combine flavoured canola oil, lemon juice, rosemary and cracked black pepper. Add light flavoured fish, poultry or pork, tossing to coat. Marinate for at least 30 minutes or overnight covered or sealed in the refrigerator. Drain marinade and discard. Grill fish, poultry or pork on oiled grill set over medium barbecue coals or on mid-shelf of a conventional oven set on broil.

Give a Gift of Flavoured Oil

Give a gift of flavoured oil. Make a flavoured oil just before giving it and pour it into an attractive bottle. Attach a recipe, which uses the flavoured oil along with directions for keeping it refrigerated and using within one month.

Give a decorative bottle of oil for display in the kitchen. Infuse the oil with fresh herbs and place in a distinctive bottle. Be sure to attach a card saying the bottled oil is only for display.

For those who grow a herb garden during the summer, finding fresh herbs is easy. In the middle of winter, talk to your grocery store produce manager. He should be able to special order herbs year around.

Tip: Oil is not a preservative. If making flavoured oils without heating treat the finished product as a fresh product. Use within 1 or 2 days and keep refrigerated.

Tip: If you are using one of the new digital thermometers, remember it can not be left in the oven.