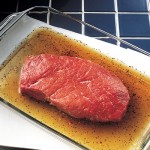 Marinating or soaking meat, poultry, fish and game in a seasoned liquid, called a marinade, enhances the flavor of the food and often makes it more tender. However, unless proper food safety techniques are followed, marinating can also increase the risk of contamination, which may lead to food borne illness.

The ingredients in a marinade usually include an acidic liquid such as lemon juice or lemonade concentrate, cranberry and other fruit juices, tomato juice, wine, beer, soy sauce, vinegar and vegetable oil such as canola oil, plus seasonings – chopped onion and garlic, parsley, fresh or dried herbs, salt, pepper and other spices. Or commercially made salad dressings may be used instead.

The acidic liquid tenderizes the food but does not destroy any bacteria which might be present.

If a recipe calls for piercing the food to allow for bottom marinade penetration, make shallow cuts at an angle rather than deep cuts which could allow bacteria to penetrate deeper into the food. If you do pierce the food with deep cuts, it must be cooked to the well done stage to be sure the bacteria are destroyed. A meat thermometer inserted into the food should measure 77°C (170°F).

Use Plastic or Glass

Do not marinate in a metal container as the acidic mixture will react with the metal. Instead, place food in a plastic food bag, pour in the marinade; seal and refrigerate, turning the bag over from time to time. Or use a sealable plastic or glass container and cover with plastic food wrap. Uncover and turn the food over occasionally so all sides are coated evenly with the marinade.

Marinate in the Refrigerator

Remove food from the marinade when ready to cook and drain it well. Do not reuse the marinade for marinating as it will contain juices from the raw food, which could be contaminated with bacteria.

The brush used to spread the marinade on raw food will be covered with bacteria. So if glazing or saucing the ready-to-eat-food, use a second brush. Or, the original brush may be used if it has been washed very thoroughly in hot soapy water.

Raw fish is marinated in lime juice to make seviche (ceviche), an appetizer popular in Latin America. The action of the acidic lime firms the flesh of the fish and turns it white. But, because the lime juice is diluted by juices from the raw fish, it is not sufficiently acidic to destroy any pathogens which might be present and there is a high risk of food borne illness. So to reduce the risk somewhat, follow these recommendations when making seviche:

THIS INFORMATION PROVIDED BY THE FOOD SAFETY INFO LINE
A PROJECT OF THE ALBERTA HOME ECONOMICS ASSOCIATION
FOR MORE INFORMATION CALL TOLL FREE: 1-800-892-8333

The production of this fact sheet has been supported by Agriculture and Agri~Food Canada, Agriculture and Food Council of Alberta, and the Canadian Adaptation and Rural Development Fund.