Skip to content
Home » Mold and Cheese: The Good and the Unsafe 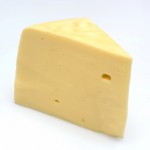 Good molds play a key role in the production of many of the world’s finest and most popular cheeses. Cheese-makers use specially cultured molds to produce the veins in flavorful Stilton, Roquefort, Blue and Gorganzola cheeses. They also give cheeses like Brie and Camembert their delicious edible rinds. These molds are safe to eat.

Other common molds, however, can cause spoilage by growing on the surface of cheese. Molds are like tiny plants. What we see is like the flower. What we don’t see is the stem and root system growing into the food. Millions of spores are produced by each mold colony that is visible on food. They produce streaks of discoloration, clumps of blue or green or white fuzzy looking growths. These molds are unsafe to eat. Molds grow fastest in warmish temperatures on cheeses that have been exposed to air and moisture.

We used to think common molds were harmless; that they could simply be removed and the food consumed. But, now we know that some of these molds can produce poisons called mycotoxins which become part of the food and are not destroyed by cooking. Some mycotoxins can cause immediate illness. Others are thought to be carcinogenic.

To prevent the growth of mold on semi-soft, firm and hard cheeses like Mozzarella, Cheddar and Parmesan, refrigerate the cheese sealed in its original package until ready to use. Once opened, wrap the cheese tightly in waxed paper or plastic wrap and keep refrigerated. If moisture has condensed on the cheese, wipe it off with a clean paper towel before rewrapping.

If mold forms on firm cheese, carefully cut off the mold plus 2.5 cm (1 inch) of cheese surrounding it; wrap carefully and discard to avoid spreading the spores in your kitchen. Wrap the trimmed cheese in new waxed paper or plastic wrap; refrigerate and use as soon as possible.

To prevent the growth of mold in fresh cheeses like Cream, Cottage, Ricotta and Quark, and soft cheeses like Brie and Camembert, keep them sealed and refrigerated at 4° C (40 °F), as much as possible. If you spoon some cheese into a bowl for serving, don’t return leftover cheese to the original container, and/or wrapper.

If mold should grow in these cheeses, the mycotoxins could penetrate farther. So rewrap or recover the cheese to avoid spreading the mold spores and then discard it.

How Long Can Cheese Be Kept?

The shelf life of cheese varies according to the type. The best before date is a good guideline. Once opened, assuming proper packaging and refrigeration:

THIS INFORMATION PROVIDED BY THE FOOD SAFETY INFO LINE
A PROJECT OF THE ALBERTA HOME ECONOMICS ASSOCIATION
FOR MORE INFORMATION CALL TOLL FREE: 1-800-892-8333

The production of this fact sheet has been supported by Agriculture and Agri~Food Canada, Agriculture and Food Council of Alberta, the Canadian Adaptation and Rural Development Fund; and Alberta Milk Producers.